Every Australian colony published regular gazettes to communicate legislation, regulations and information to the public service in particular and the community in general. Some departments such as education and police grew in size and began their own versions.

Indeed government gazettes are published by governments worldwide as a means of communication to officials and the general public. Such gazettes are useful not only to monitor the actions of the government but also as far as family historians are concerned, they are primary source documents that have been largely overlooked by many researchers. The indexing projects by some family history societies and the gazette digitising project by Archive CD Books Australia are now making the early gazettes known and accessible to researchers.

Parallel to the work by Archive CD Books Australia is the growing trend by governments to place their gazettes online. The best example can be found at: www.gazettes-online.co.uk which is the site for the British Government’s gazettes, The London Gazette having archived its issues for the war periods of 1914–1920 and 1939–1948.

The University of Michigan’s School of Information maintains a site listing all online government gazettes worldwide at: www.lib.umich.edu/govdocs/gazettes. However, most of these sites list only current and very recent editions. 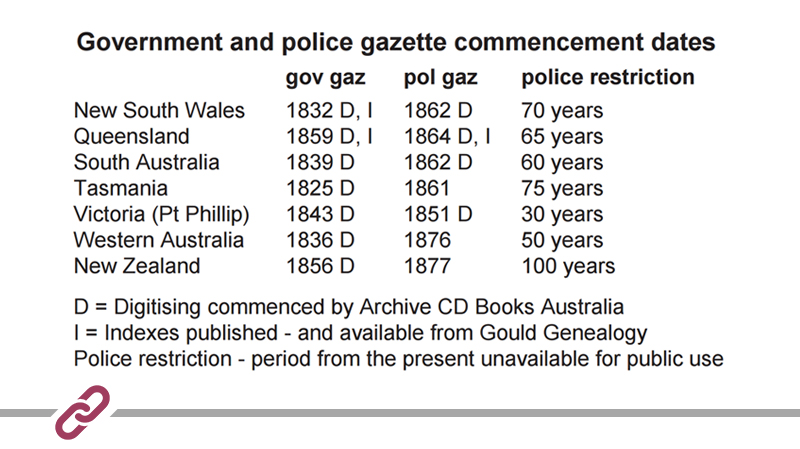 Gazettes as a research tool

There is little doubt that government gazettes are a largely untapped resource and that a clear understanding of the scope of their content still hampers research. The remainder of this article will focus on Australian and New Zealand government and police gazettes and their value to researchers.
• Your ancestors farmed and may have needed to brand their stock. Brands were registered and the public advised accordingly via the government gazette.
• The letter carrier is unable to locate the addressee for mail and returned the letter to the post office—dead letters were listed in the government gazette.
• Your ancestor may be a victim of a crime or an offender, and the police are involved. All crimes were listed in reports by the police commissioner, naming victims, the offence details, the officers involved and the suspects if known.
• An ancestor may have escaped custody or deserted ship or H.M. service – or his wife! The descriptions of such are often very detailed: age, height, “native of …”, sometimes accent, appearance, marks (scars, tattoos), peculiarities, even photographs in some later police gazettes. See example illustrations.
• Local schools charging fees predated government schools with compulsory education, but many poor people could not afford fees and so early colonial governments provided subsidies to recognised teachers and named them in the gazette. Many other professions, such as doctors, marriage celebrants, publicans, auctioneers, hawkers, magistrates and other legal officers, sundry food handlers and the like were registered and reported.
• Your ancestor fails to pay their council rates on time. They may be named in the gazette.
• Young colonies attracted entrepreneurs and some business ventures failed, forcing the proprietor into bankruptcy—the gazette names the bankrupt and their circumstances.
• Although the colony was protected by British garrisoned troops there was a need to supplement this force from time to time with volunteers. Some records and especially promotions are published in the gazette.
• Those that died needed to have their estates wound up. The executor needed to pay debts and distribute assets and a notice in the gazette was deemed to comply with the legal requirement of employing best endeavours to contact all that may have an interest. 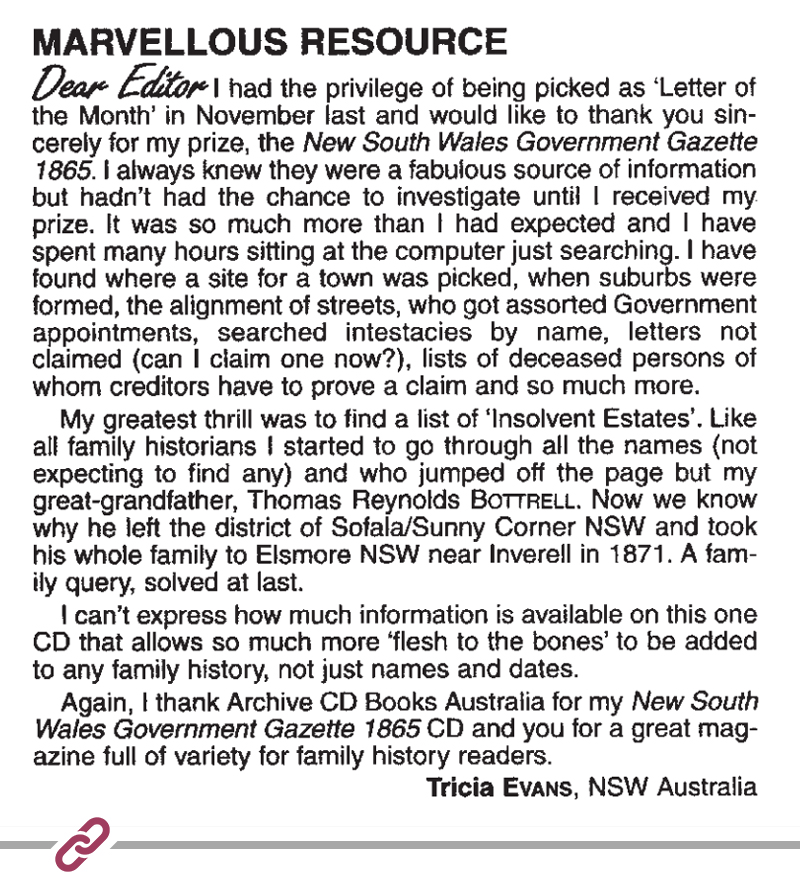 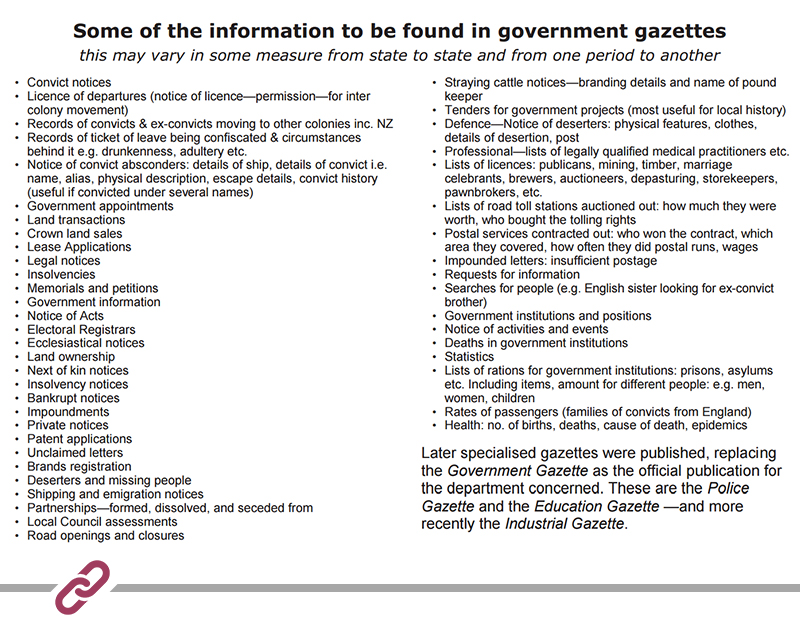 • Memorials and petitions prepared by citizens such as those to create a new local government region are published together with the names of the signatories. • Deaths in government institutions such as hospitals, gaols and asylums are reported.
• The Hobart Town Gazette published extensive local government assessments.
• Early New South Wales and Tasmanian gazettes dealt with convict matters – licences, ticket of leave, absconders etc.
• Some Victorian gazettes published substantial Land Tax Registers listing thousands of landowners.
The above is just a small taste of some examples that may lead to the naming of your ancestor in a gazette. According to the nature of the entry, you may receive the bonus of some vital statistic about the person previously unknown to you or unavailable via more conventional methods. For example it is known that many deaths went unregistered in South Australia for a number of reasons. If the death involved the police, then you can expect that a report was prepared and a summary of that usually found its way into the gazette. Such an entry may lead you to search police records for even more details … 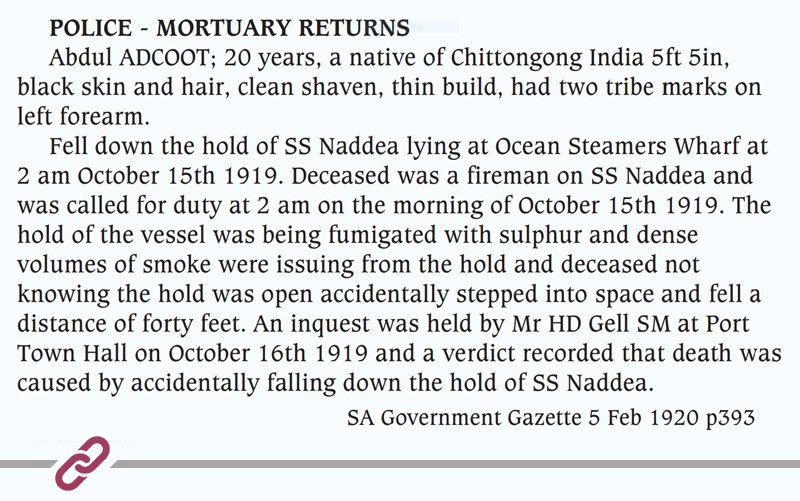 The above example mentions a number of pointers that can lead the researcher on to other material. The State Archives may hold the inquest papers, the National Archives of Australia may have material related to the shipping including the crew, and the daily newspaper may have reported the incident. Nineteenth-century newspapers would certainly have reported the inquest in detail if inquest papers have not survived. The following incident highlights a different set of records that may be worth calling up. 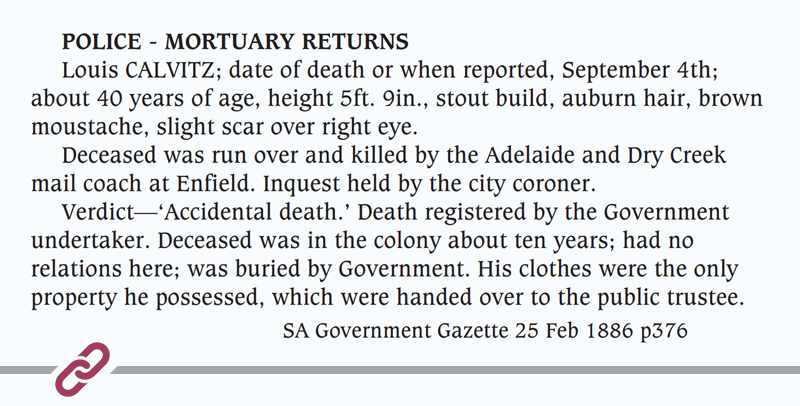 A whole range of licences helped the government’s revenue stream and regulated certain activities. Hawkers were required to hold a licence. Indeed auctioneers through to medical practitioners required a licence to conduct their profession. In Queensland, a licence was needed to cut timber and make bricks. In most jurisdictions, ministers could only perform marriages if they were licenced by the government and incidentally this is why of all vital records, marriage certificates are likely to not only have survived but also be correct. The minister performed the civil part of the marriage as a licenced agent of the government.
Some of the material in government gazettes are general reports about conditions and current issues of the day. The family historian trying to develop an understanding of the circumstances under which ancestors lived can gain great insights from reading some of this material and attempting to understand how this may have impacted on their lives. For example, early gazettes often feature reports resulting from a bevvy of complaints about a particular emigrant voyage that forced an official enquiry. Maybe the ancestor of interest travelled on the particular vessel and although they are not named in the report, at least the researcher can gain a greater understanding of the conditions endured by their forefathers.
A few key gazettes offer special reports and material of particular significance to researchers. In the case of South Australia, one such useful record is the Return of deaths and burials occurring on board emigrant ships from 1849 to June 1865 (Govt Gazette 25 Jan 1866 pp75–96) covering deaths of emigrants en route to South Australia. Another issue of similar significance is the issue of 20 Apr 1865 that details persons found dead in public places for a number of preceding years.
Many government gazettes contain information relevant to family historians simply because citizens have to deal with their government. If you are looking for names of people appointed to public office or employed by the government; details of land grants, transfers and leases; details of convictions and pardons or law breakers; licences for publicans, auctioneers and others; doctors; ship-owners; the list is almost endless, then you will need to consider a search of government gazettes!
The character of the gazettes changed over time and varies in measure between states. The 20th Century government gazettes are less useful to family historians than those from the 19th century. Police gazettes, however, continue to be useful well into the 20th century.

Police gazettes differ from government gazettes in that they are not open to the public for some time after creation. See table for restriction periods on page 5.
They were compiled generally weekly in each Australian state starting from around the 1850s and 60s, as a confidential record of police activities, reports and information – for police use only. They often contain details that would not be found in the more publicly accessible government gazettes.
Information on crimes committed. One of the chief purposes of the gazette was to communicate information on crimes. Including what was committed, where it was committed, details of the victim of the crime, the details of the crime, any information or evidence gathered that may lead to the arrest of the criminal, details of the suspect or appearance of the criminal and who to contact with further information. These accounts often included names and detailed descriptions.
Information regarding criminals. This includes lists of warrants 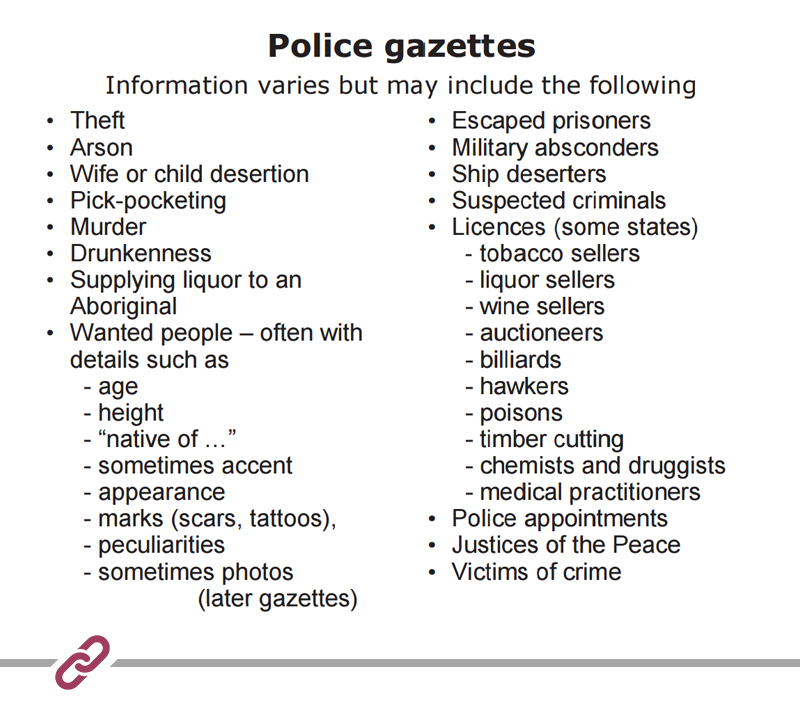 issued, arrests made, convicted people, people discharged from prison and people released on good behaviour bonds. These lists often included details of the crime, the name of the criminal, any alias’s, sex and their race, the location, sentence and terms of release. More detailed information including the appearance of the criminal including height, hair colour, eye colour, any distinguishing features, clothing, place, (including names of ships or prisons or any other relevant place) and the crime they were included in, as well as any dates and sometimes photographs.
Notice of missing persons. These are often recorded as missing family or friends, but also anyone who someone wanted to find. Information such as the missing person’s description and appearance is given, the nature of their disappearance, the time of their disappearance, their supposed destination, details of their last known or supposed whereabouts is reported when relevant. Official police department information. 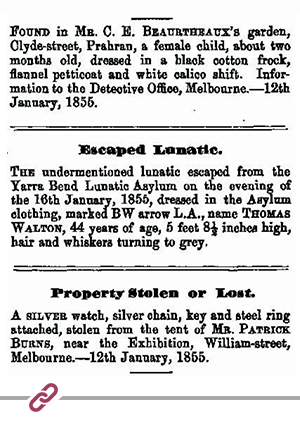 Personnel change within the force. Lists of promotions, dismissals, resignations and appointments are given with information on position, place, and name. Also appointments such as Justice of the Peace and inspectors. Other related government department information. The police gazettes also include information on vacancies, appointments, promotions and resignations in other government departments. These include lists of Justices and court clerks etc. Notice of amendments and introductions of new acts of parliament are also given. Court lists and sessions are included. Notice of licences (some states). Licences of various types and lists of those holding them are given in the police gazettes. These include the name, date, location for the licences. Information from other state police gazettes. Often it was necessary for communication between states and even New Zealand regarding particular criminals, crimes, or missing persons. These are also recorded in the police gazettes, mainly regarding serious crimes or wanted people. 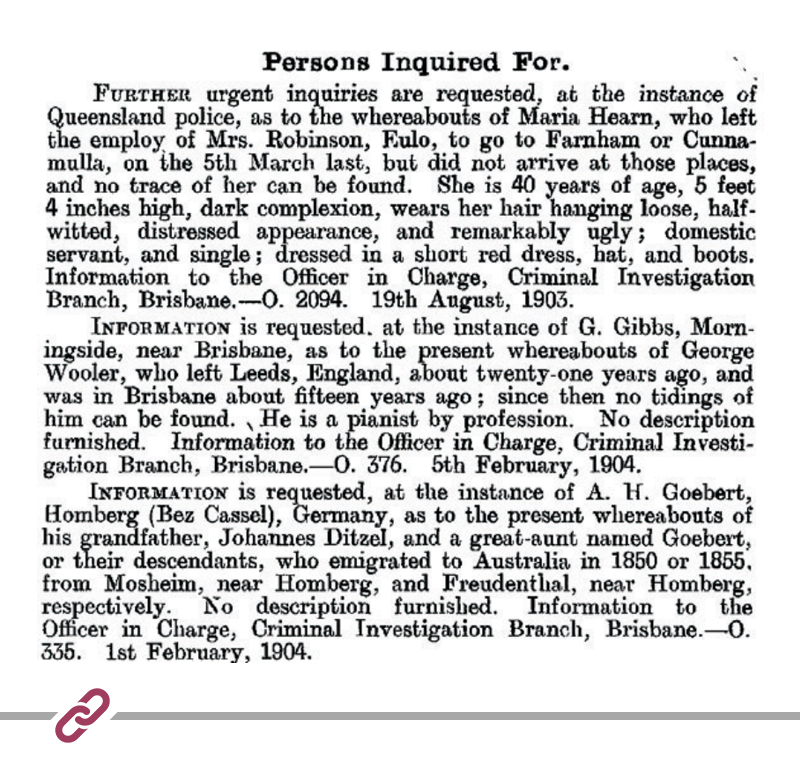 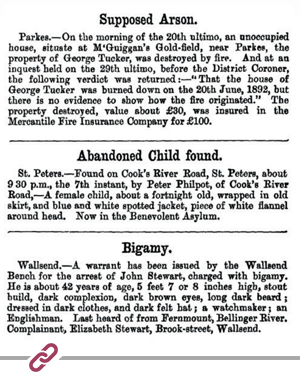 This article was compiled by Alan Phillips with acknowledgement also to contributions by Graham Jaunay, Heather Garnsey and Penny Stanley 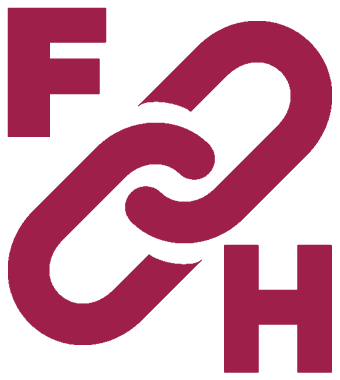